If you’ve been to the Grand Canyon’s South Rim, you’ve probably had someone tell you, “Yeah, the North Rim is better.” Like a hipster whose favorite band is someone you’ve never heard of, who drinks an obscure beer you can only get in this one shop in Vermont, he can’t be stopped: you’ll hear all about how the Hipster Rim is better, how it’s not as crowded, how it’s so far from civilization that only the cool people go there. You thought you’d really enjoyed your time at the Mainstream Sellout Rim, but the North Rim Hipster will set you straight.

Well, it’s also an extra five hours to get there from the Mainstream Sellout Rim—a bit less if you go straight from Flagstaff and skip the Sellout Rim altogether, but you shouldn’t do that unless you’ve already been.

They’re not completely wrong: the Hipster Rim is worth the drive.

It’s quite a drive, too. From Grand Canyon Village, you take the road out to Desert View and exit the park to the east. Then it’s a long drive through the Navajo reservation, the landscape dotted with roadside stands selling jewelry and pottery and rugs—to the first place where you can cross the Colorado River, the Navajo Bridge, where visitors are asked to please not plunge to their deaths.

From there it’s another long drive through nothing, to the “town” of Jacob Lake, where you can get a forgettable burger at a friendly inn; then south through a beautiful National Forest to the park’s northern unit.

It’s smaller than Grand Canyon Village. One hotel, and a couple restaurants. You basically walk down the trail to Bright Angel Point and see the Canyon. You’d better like the view, because that’s the only one you’re getting. 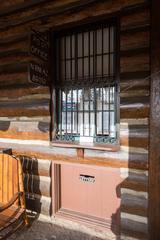 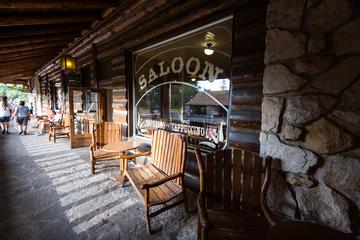 It’s a spectacular view, though. You can’t see as far up the Canyon from here, but you’re actually on the brink of a couple of side canyons, and you’ve got near, middle, and far features to really give you a perspective on the size that you can’t get from the South Rim.

Bottom line: don’t go here instead of the South Rim. Yes, I know what the hipsters told you, but don’t even go here first. Millions of people get their first glimpse of the Canyon at the South Rim, and it’s popular for good reason. They’ve got the infrastructure to handle the crowds. It’s not a problem.

The South Rim has the best view: That’s not just me talking, that’s the experts who decided the location for the main park. When you visit the South Rim, it’s not a random point on the south side; it’s the place the experts decided offered the best view that could be had anywhere on the rim. You can see, even on a bad day, more than a hundred miles up the Canyon. You can see the view in both directions, east and west, sunrise and sunset.

Yes, the Hipster Rim has more impressive features, and whatever, but in general? No. Don’t come here first, no matter how much the hipsters try to convince you.

But there’s one thing North Rim Hipsters and South Rim Sellouts can agree on: both are better than the Poser Rim, with the gimmicky glass walkway. Yeah, I know it’s only two hours from Las Vegas, but please don’t go to “Grand Canyon West” on the Hualapai reservation for your first trip to the Canyon—and if you do, don’t say you’ve “been to the Grand Canyon,” because you haven’t. The South Rim is way better, dude.